Kyrgyzstan: The Hermes Scarf and the Appaloosa Horse 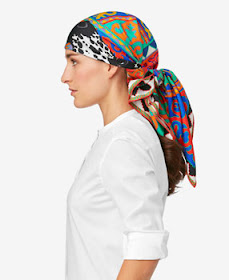 Luxury goods group Hermes recently introduced its new collection of silk scarves and shawls. A collection item called Appaloosa des Steppes has Kyrgyz national patterns together with an image of an Appaloosa horse.

This was actively covered by Kyrgyz media, but an exciting story, which this item, intentionally or not, symbolizes, was left almost unnoticed.

The story has rewritten the history of the Appaloosa horse. Still it is unknown whether the luxury goods maker was aware of and inspired by it — Hermes did not respond to a request to comment.

The story begins back in 2012, when Scott Engstrom, then a 68-year-old lady, who breeds Appaloosa horses in New Zealand, saw Conor Woodman, a director and a television presenter, in his Around the World in 80 Trades.

In that show Conor traded different things in foreign lands — from coffee in Africa and chili sauce in India to surfboards in China and horses in Kyrgyz Republic. Scott saw Conor selling a horse to a farmer and it looked like one of her Appaloosas. "And then I stood up in my lounge and screamed my head off..." recalled Scott.

As Conor said, after Around The World in 80 Trades, in which he bartered his way round the world, a lot of people got in touch with all sorts of crazy business ideas they wanted him to help them with. So, as he remembers, he discounted Scott’s email as the ramblings of a crazy old lady and got on with his life.

But Scott didn't stop and was bombarding Conor with emails — for years she had a theory that the Appaloosa actually came from Asia. She had to find Martin, the horse Conor sold.  DNA evidence would prove her theory.

As believed by most breeders, Appaloosas arrived in Mexico with the Spanish conquistadors. Scott believed they moved into America across the Bering Strait between Russia and Alaska, long before the Spanish Conquistadors brought them to the continent.

This is how the film Secret Horse: Quest for the True Appaloosa was made. In 2012, Scott and Conor flew to Kyrgyz Republic to search for the evidence. The film tells Scott’s story — how her passion about the Appaloosa ended up changing the history of the North American horse.

The journey was not easy — Martin , the horse, had been sold multiple times and the trail led to a dead end. After attending a game of kok boru or a goat polo, they learned about a place where there were horses that sounded like Appaloosas. Scott and Conor spent three days until they reached a remote valley, which finally rewarded them with a herd of Appaloosas.

In Kyrgyz Republic the horses are known as chaar, which translates as 'spotted'. The owners of the horses let them be DNA tested. Scott's preterm confidence was finally confirmed when DNA results from Texas University were received.

The Hermes scarf reminds us about this truly unique combination — a combination of Appaloosa horses and their origins.

Here is the trailer for this remarkable film. [2 minutes. If the film does not display on your device, go directly here: https://www.youtube.com/watch?v=RT50CsElLYc]

Muhayo Alliyeva, founder of the Uzbek fashion house Bibi Hanum, is one of three sisters raised in Tashkent by the father in a family that did not conform to the stereotype of the traditional Central Asian patriarchy.

He was, in fact, enlightened and progressive in seeking independence for his daughters. "My father was himself well educated with diplomas from two universities and always wanted all of us to get good education".

An older sister, indecisive and indifferent about education, went to seamstress school to learn tailoring skills. It was Muhayo, however, who became fascinated with her sister’s assigned projects and provided regular assistance with her homework, learning the craft at the same time.  As the two worked together, neighbors took note and began ordering clothes for themselves.

In the period of economic instability following the collapse of the Soviet Union, Muhayo’s father believed that learning English would be a tremendous advantage for Muhayo and did not oppose her, then 17, spending a year studying in the United States as an exchange student.

At that time it was not common for a young Uzbek woman to live independently in a foreign country. Muhayo remembers when her relatives were trying to dissuade me from going, her father's response was "If she is selected among all the competitors, I will give all the support that she needs".

Her study abroad exposed Muhayo to Western culture, an experience that continues to influence her worldview and design. Not long after her return to Tashkent, her father passed away.

Then a turning point for her family - her two sisters opted for traditional, arranged marriages while 19 year-old Muhayo chose to follow the path of autonomy initiated by her father.

After completing an international business course she opened a design and sewing workshop in her mother’s garage hoping to include her sisters in the venture. At the same time, she worked as a cultural assistant at the US Embassy with assignments that included international art events.

“Unfortunately, my sisters both suffered domestic violence that is sadly common in my country, and I couldn’t convince them to seek change. I tried to involve them in our business, but their family problems always interfered.

I was determined my married life would be different; I am fortunate my husband is very kind and supportive in everything that I do, even allowing me to take our children abroad with me even though he cannot leave his job to join us. He is always there to help me when I need it.”

While her passion for design and textiles continued to grow, Muhayo experienced a revelation when she discovered the Western celebration of Uzbek textiles that included extensive museum collections, academic experts, publications and information not readily available in Uzbekistan.

Determined to play a role in reviving and adapting Uzbek textile traditions that were being copied elsewhere, Muhayo applied for and was awarded a grant in 2011 from the Prince Klaus Fund in the Netherlands to produce 20 robes (chapan) based on traditional designs from a catalog of vintage robes. With this, her company Bibi Hanum was formed, named after the favored wife of Amir Timur (Tamerlane). Two years later, the Bibi Hanum line was accepted into the prestigious Santa Fe International Folk Art Market  (New Mexico, USA) where she has continued to bring her designs every year since.

With growing demand for her line, her sisters unavailable, and a desire to help women, Muhayo saw the opportunity to “do well by doing good” and reached out to form alliances with programs helping women develop skills and economic independence.

"I think there is a reason for everything that we do in life. I feel that all of the places where I worked had a tremendous impact on my life and in what I would do in the future. I worked in every job with great passion and loved learning new things and tried to improve the job I was doing. I could never say no to extra work. I have learned so much working both at International School and the US Embassy. All of the skills that I obtained working there, I am applying in my current work.”

In addition to the Santa Fe International Folk Art Market, Muhayo exhibits at shows in New York and Europe.

She also sells internationally through her ecommerce website, expanding her fashion line to include home accessories exquisitely crafted with traditional materials and techniques adapted to a modern lifestyle.