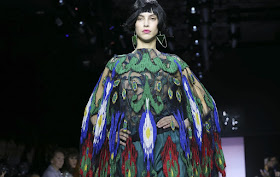 Georgio Armani said of his Privé Couture Spring show last month: "The idea of this show originated from a memory. In 1990 I used an ikat blanket I found in a flea market to tailor three jackets for the spring summer collection. What I liked about this particular technique was the blurred effect of the motifs, the fact that the decorations were never well defined and I conveyed this concept by concealing the prints, filtering them through different layers".

He went on to explain "It is a fabric that I have always loved, although I have never used it as much as this season."

The collection, combining the glory of ikat with Armani's renowned tailoring, was masterful. 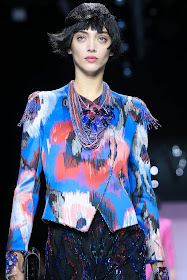 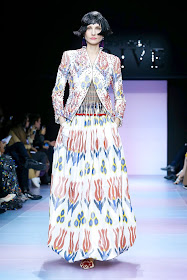 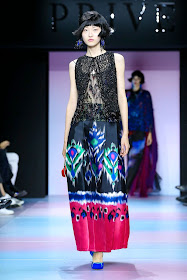 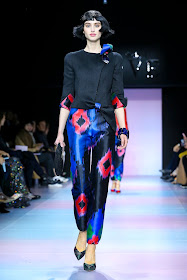 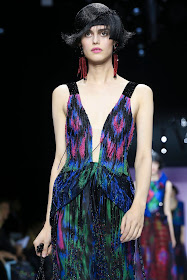 A Journey through Uzbek National Identity on the Tashkent Metro - #2

This is the second part of Filip Noubel's interesting perspectives on Tashkent's metro system viewed through the lens of Uzbek identity. Mr Noubel subtitled his piece "A subterranean lesson in Uzbekistan's turbulent 20th-century history" [View Part #1]

As in other Soviet metro systems, each station of the Tashkent metro was assigned a particular political and cultural message to illustrate key messages of Soviet ideology.

When Uzbekistan gained independence in 1991, its new government followed the example of other young states and renamed streets, squares, and metro stations to distance itself from certain elements of the the Soviet past.

In doing so, they reaffirmed long obliterated and sometimes censored symbols of Uzbekistan's pre-Soviet past. Of the 23 stations constructed during the Soviet period, 11 have been given new names. For example, Lenin Square station is now typically called Mustaqillik Maydoni, or Independance Square, in Uzbek.

Of the 29 stations operating today  five metro stations are particularly revealing in what they tell us about Uzbekistan's changing narratives around national identity:


The station's overground building conveys this message of futurism. In 2008, Uzbekistan's then President Islam Karimov, who kept a rather independent line from Moscow, renamed the station Bunyodkor (“The Founder”), in honour of his own role as founding father of the new Uzbek nation.

However, in 2018, Uzbekistan's second president Shavkat Mirziyoyev, who is keen on closer ties with Russia, restored the station's previous name.

This station's name symbolises the Uzbek economy's everlasting dependency on cotton production. During the Soviet period, Moscow assigned each of the 15 Soviet republics a particular crop to produce en masse.

This focus on cotton monoculture has been continued by all subsequent Uzbek governments at a high price for the country's population. Irrigation for the vast cotton fields has brought ecological disaster on the country with the shrinking of the Aral Sea. Today Uzbekistan is the world's eighth largest cotton producer.

This station was named after the nearby district of Chilonzor, whose massive residential complexes were developed along the lines of Soviet urbanisation. Chilonzor is one of the most imposing in terms of art: its walls are covered in white marble, while several panels of 3D ceramics, all made by leading sculptors, illustrate the Soviet vision of Uzbek life: a mix of rural traditions and urban achievements, all enhanced by a series of massive crown-shaped chandeliers reminiscent of the Moscow metro.

Here is one "Uzbek scene," depicting men drinking tea on a tapchan, a wooden platform that helps to isolate from the scorching heat:

This station was named after the 15th century poet and linguist Alisher Navoi, whom several states in Central Asia claim as their own. Navoi was born on the territory of modern Afghanistan, and wrote in Persian, Arabic, and Chagatai, the ancestor of the modern Uzbek language.

In the Kremlin's narrative the cosmonauts, the Soviet Union's spacemen, were the apex of Soviet science and progress. This station is decorated in cosmic blue with portraits of Uzbek medieval astrologists and Soviet cosmonauts.

From Soviet to post-Soviet, from socialist to Islamic, Tashkent's metro celebrates and commemorates Uzbekistan's remarkable history. Its stations have become an integral part of any visit to the Uzbek capital, perhaps signalling that tourism will be the next chapter in Uzbekistan's long nation building narrative.